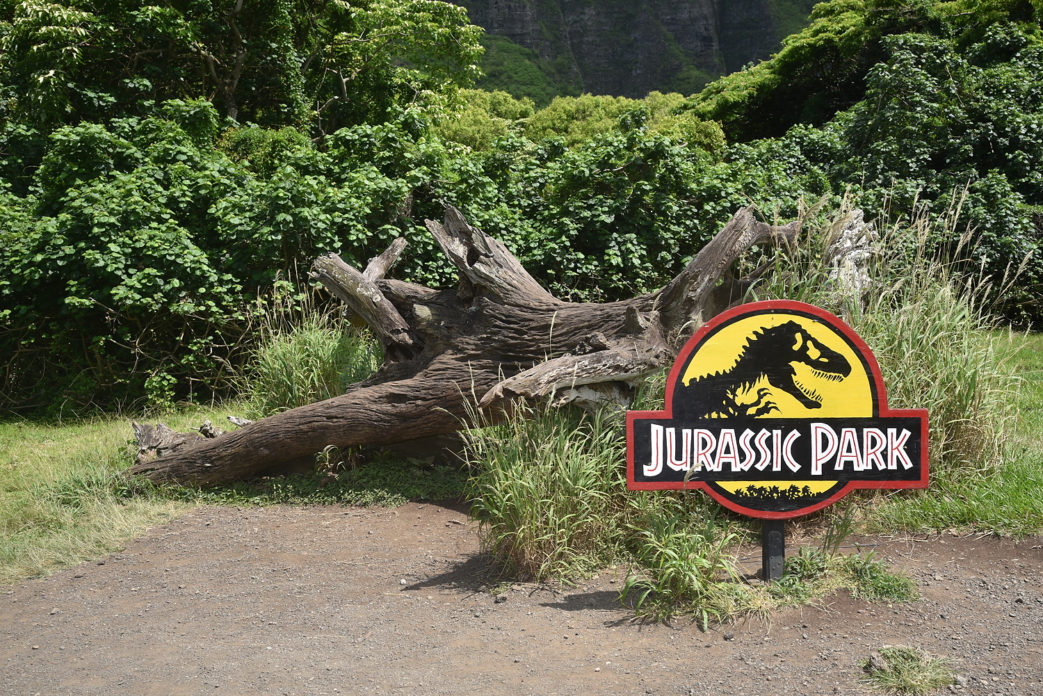 Twenty-five years ago, Jurassic Park transported moviegoers around the world to a place where dinosaurs still roamed the earth. Now, more than two decades later, our favorite dinosaurs are back on the big screen, and our Team had the opportunity to create an immersive experience for media members at Kualoa Ranch Private Nature Preserve as part of a Jurassic World: A Fallen Kingdom press junket.

Current Affairs was proud to Partner with Kualoa Ranch and NBC Universal on a three-day press junket, welcoming not only the cast and crew of the blockbuster hit but also members of the media from around the world. Several distinct areas were created for this multi-day experience:

The base camp was designed as a home base for the amazing crew who made this junket a reality. Here, they enjoyed Hawaiian food truck cuisine from Local Stop and Flyin’ Ahi, recently named one of Hawaii’s Top 5 Food Trucks by Honolulu Magazine.

The four shooting sites housed seven trailers and tents in which the cast and crew could relax between interviews. Each 10’ x 20’ tent space was air-conditioned and featured lounge seating, lighting, a hair and make-up station, and personalized food and beverage service. 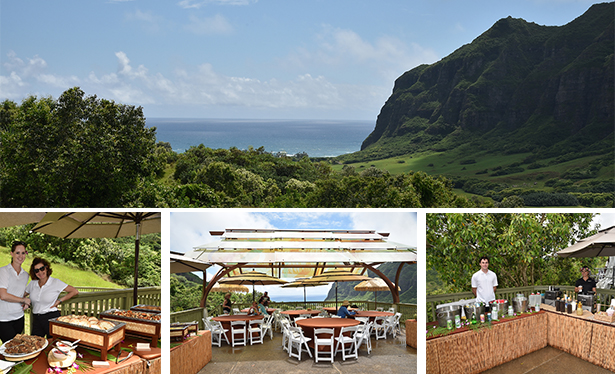 Hale Ikena is best known in Jurassic World as the gyrosphere deck where visitors to the park could enter the gyrosphere and engage in an interactive experience, moving amongst life-size dinosaurs. Hale Ikena became the main hub for activities throughout the junket. Our Team set up tables with pecan linens, surrounded by modern white chairs, and lauhala umbrellas overhead. Food and beverage service was available throughout the day, including a full service coffee bar complete with espresso and various coffee roasts, a local-inspired breakfast and plate lunch style cuisine. Each day, our coconut husker offered Guests fresh coconut water followed by an afternoon treat of shave ice and Hawaiian flavored gelato. 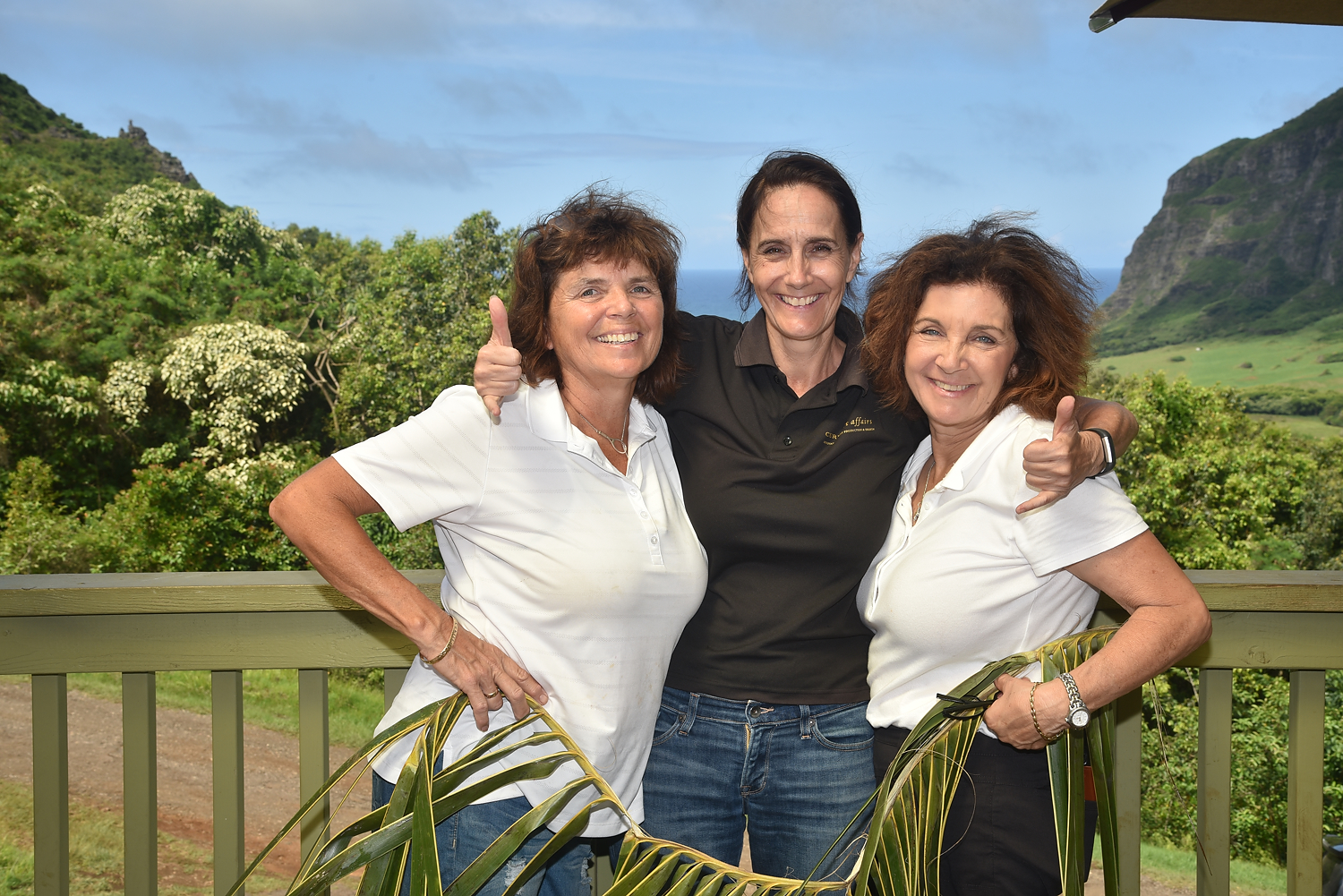 A virtual reality tent was set near the deck, equipped with lounge furniture and VR goggles for a truly immersive Jurassic World experience. Another lounge area was positioned adjacent, with Jurassic World themed merchandise and props from the movie available for media viewing. 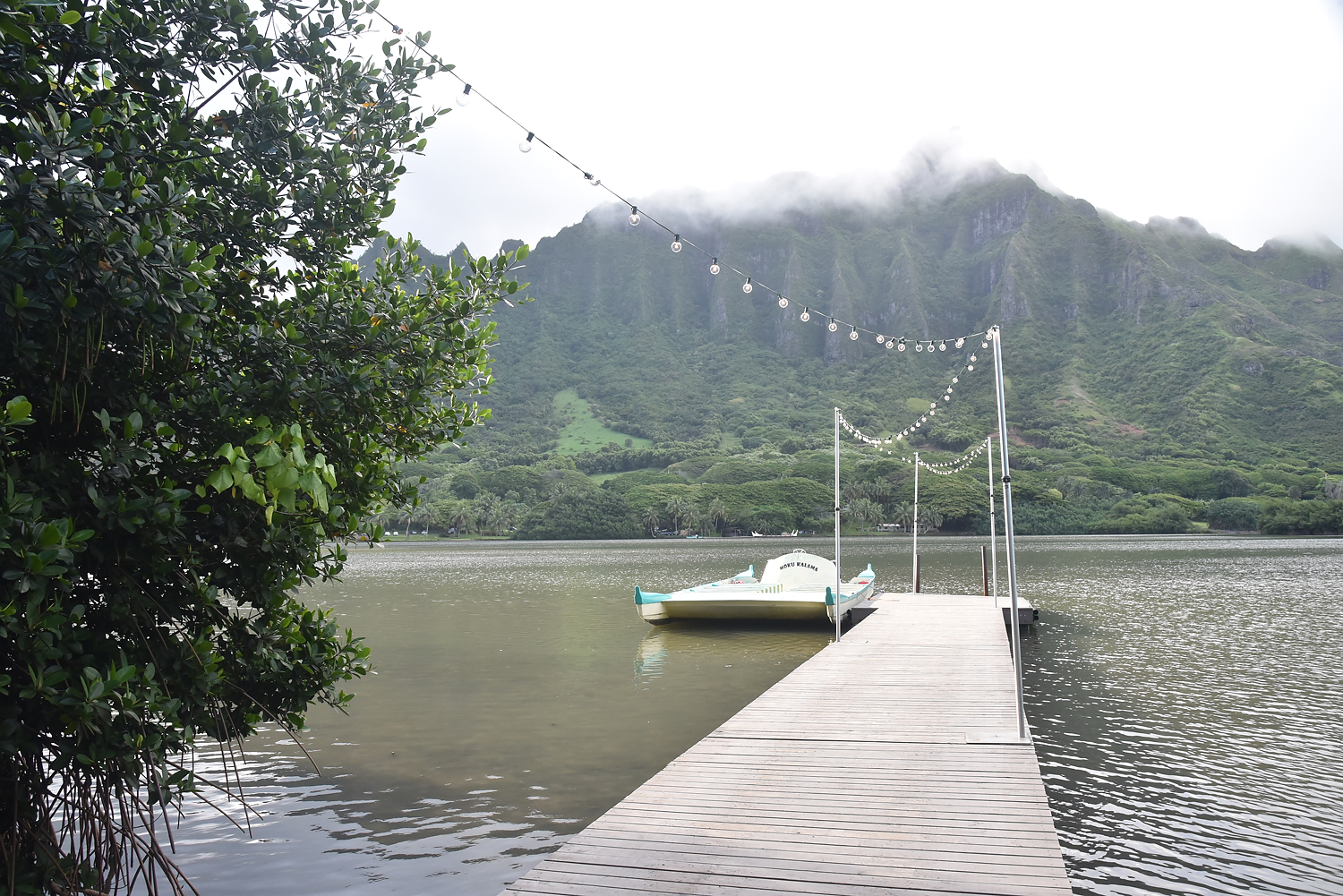 Following two days of press interviews, the invited domestic and international media Guests were treated to a local-style upscale luau held on the beach at Kualoa’s Secret Island. Our Team set the stage with a mix of wood farm and bamboo tables, accented with tropical print decor and pops of vibrant florals, with string lighting overhead. Our custom bamboo bar featured two themed cocktails: the Blue Mai Tai and the T-Rex Margarita. 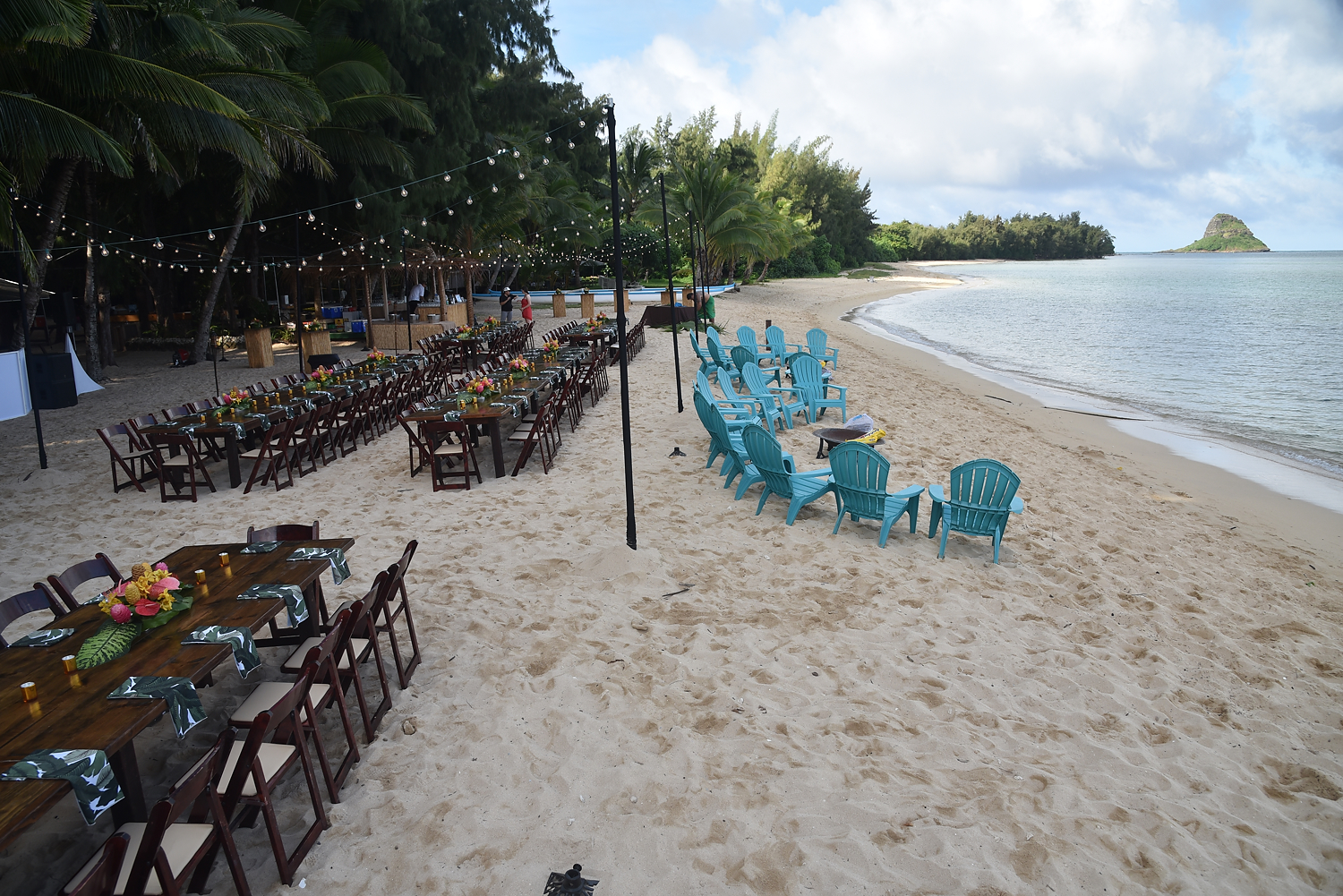 Guests enjoyed local cuisine for dinner, followed by a beachside S’mores bar for dessert, complete with shaved coconut, milk chocolate and a choice of graham crackers or macadamia nut cookies. To top it off, our favorite (and giant) Velociraptor made a special appearance for photos with our Guests.

After dinner, the media were invited back into Ka‘a‘awa valley, where they were given the opportunity to experience “glamping” for the first time ever at Kualoa Ranch. Our Team assembled 20 cotton bell tents, standing 13 feet in diameter, with single and double occupancy available. Each tent included sisal floor rugs on which a raised platform bed stood with a 12” memory foam mattress and Egyptian cotton sheets. Wooden side tables were set with candles and mobile handheld camping lanterns, a valet for luggage, and Turkish towels available for showers. Our Partners at The Kahala Hotel & Resort provided robes, slippers and nighttime chocolates for all of our Guests.

Outside the tents, string lights floated above two fire pits surrounded by red Adirondack chairs. Other amenities included portable phone chargers, a full bar with vodka and pineapple juice as the featured cocktail for the late evening, homemade chips and dips, spiced nuts, cookies and much more. Guests were offered hot showers under the stars in our free-standing showers built on site, complete with portable water heaters. An air-conditioned executive restroom trailer provided all the comforts of home. 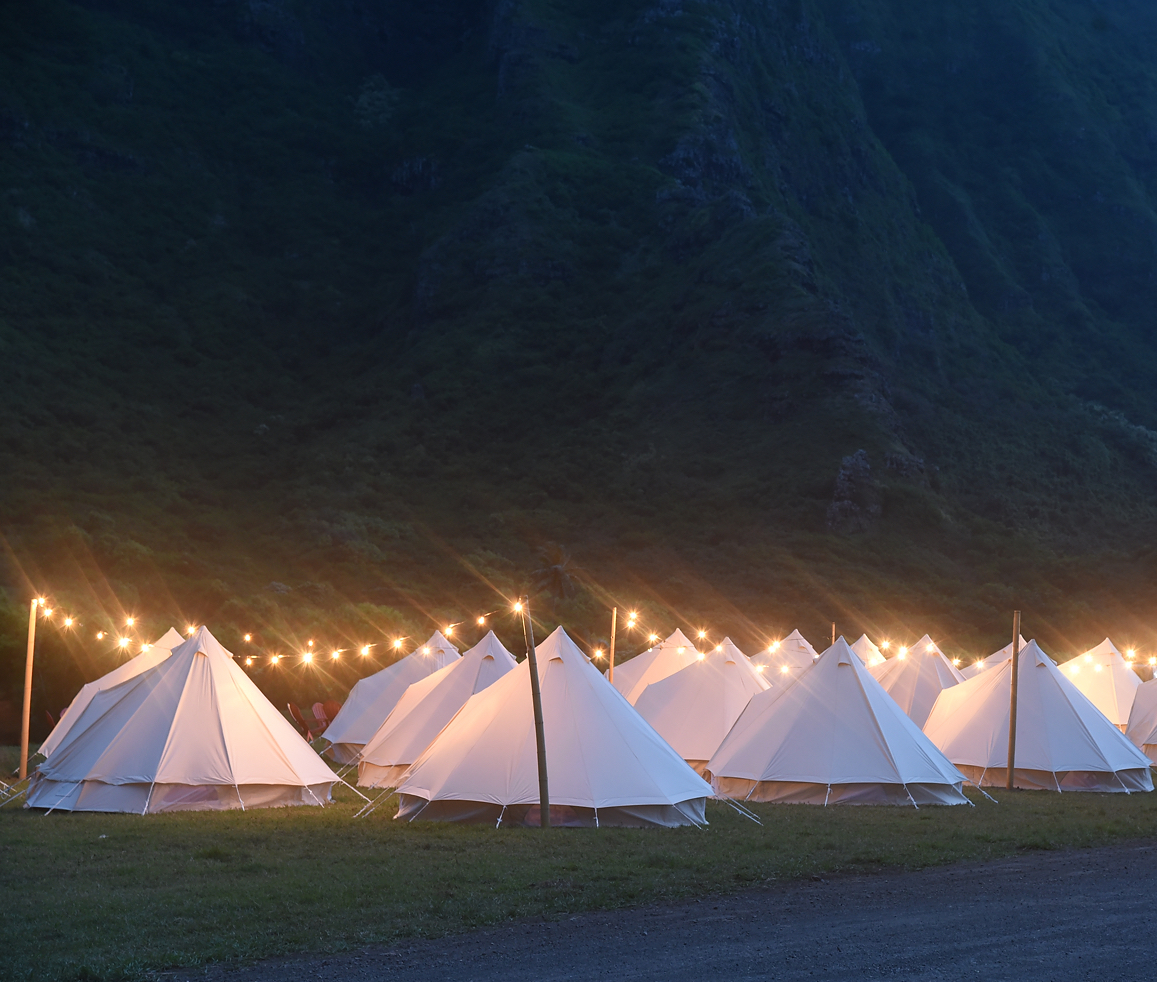 The next morning, media woke up to coffee service and a full breakfast along with the amazing view of the Ko‘olau Mountains before heading back to their hotels to share their experience with the world.

Our Team was truly honored to Partner with NBC Universal for this event and the first ever glamping experience at Kualoa Ranch. At Current Affairs, we pride ourselves on being innovative and creative with each of our events and this was the perfect opportunity to do both.

Find Out How We Can Make Your next Event A Success